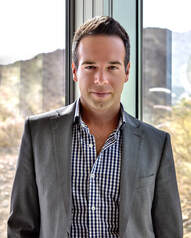 Board Member
Chad Hilligus is the recent incoming Chief Executive Officer at the Gallo Center for the Arts in Modesto, CA as of July 2021. He proudly serves on the California Presenters Board of Directors.

Prior to his work at the Gallo Center, Chad was the Executive & Artistic Director of Performance Santa Fe, worked as the Artistic Programming Consultant for the Old Town Community Theater in Temecula, CA ,and spent five years at the McCallum Theatre in Palm Desert, CA in several different roles, including Senior Manager of Sponsorship Development, Resident Producer overseeing all special programming projects, and ultimately, Director of Major Gifts. During his tenure, he raised over $5 million in individual sponsorship revenue and worked closely with the CEO in all aspects of artistic planning.

Chad has produced, directed, and performed in over 300 shows in more than twenty different countries across North America, Europe, Asia, and Australia. A former member of the multi-platinum classical crossover group The Ten Tenors, Chad gained international acclaim starring as Tony in the 50th Anniversary World Tour of West Side Story. Chad has performed as a Resident Artist with Sarasota Opera, Nashville Opera, Tulsa Opera, San Diego Opera, and he frequently appears as a solo artist with orchestras across the country, most recently with the Pacific Symphony.

Chad is also the founding producer of Innovative Arts Live. As a producer, he has collaborated with icons such as Kristin Chenoweth, Tyne Daly, Lucie Arnaz, Alan Cumming, Florence Henderson, Gavin MacLeod, Lily Tomlin, and a long list of Broadway performers. Highlights include producing and directing Carol Channing’s 95th Birthday—a star-studded spectacular at the McCallum Theatre, and a concert production of West Side Story at Boston's Symphony Hall as part of the centennial celebration of Leonard Bernstein with Keith Lockhart and The Boston Pops.  Chad also had the great honor of producing the official memorial celebration for the legendary Carol Channing.