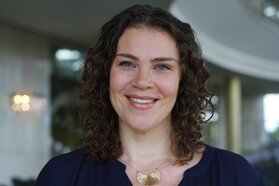 Board Member
Julia Diamond currently serves as the interim director, Grand Park at The Music Center in Los Angeles. Grand Park is L.A.’s central gathering space, a 12-acre urban greenspace and public commons that produces free year-round public arts and culture programming. The park serves to unite Los Angeles County by presenting programs that showcase the very best of Los Angeles’ creative and cultural communities. As interim director, Julia oversees all aspects of operations, facility management, programming, and engagement. She manages a $5.6 million budget, spearheading revenue strategies both earned and contributed and working to build broad stakeholder support at all levels of government and community in order to support the park’s continued growth and service.

Until June 2017, she was the director of programming at Grand Park leading all Grand Park programming, production, and marketing.  As the founding director of programming she launched the year‐round, free programming initiatives at Grand Park that have established it as Los Angeles’ premiere outdoor public gathering and cultural space. Programs and events range from music series, contemporary performing and visual art commissions, and presentations representing Los Angeles’ diverse cultural and artistic communities, to large‐scale holiday celebrations with audiences numbering in the tens of thousands. In her time at Grand Park, she has produced over 250 public events with over 400 community partners with combined audiences totaling over half a million.

Prior to joining the Music Center, Diamond worked as an arts producer, serving as managing director of the Los Angeles Dance Project, leading operations for the 2012 company debut, presenting works by John Forsythe, Merce Cunningham, and Benjamin Millepied. From 2006 - 2010, Julia served as the artistic planning coordinator at the Los Angeles Opera.  Two highlights of Diamond's tenure at the Los Angeles Opera were her role as the principal liaison for the company’s landmark production of Richard Wagner’s Der Ring des Nibelungen, directed and designed by German painter and theater artist Achim Freyer and his Berlin‐based team; and her service on the Ring Festival LA Taskforce, the producing group for LA Opera’s city‐wide “RING Festival LA 2010.”

Diamond’s performing arts career began in stage management in the US, France, and Germany. In this capacity, she oversaw productions in both theatre and opera. She specialized in contemporary works of theatre and opera, bringing them to international festivals in cities such as Washington D.C., Berlin, and Hong Kong.

In addition to her service as a member of the board of California Presenters, she currently serves on the Board of Directors of the Dance Resource Center of Greater Los Angeles, the Advisory Committee for the Cultural Equity and Inclusion Initiative of the LA County Arts Commission, and the Ford Theatres Connectors Council. Diamond has served as a grants panelist for the LA County Arts Commission (Dance), the City of Los Angeles Department of Cultural Affairs, and the Pasadena Arts Council (Festivals). She holds a B.A. from Georgetown University and a M.A. in Arts Administration from Columbia University.