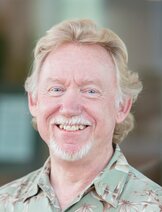 CP Board Secretary/Treasurer
David recently retired as the founding General Manager of the Soka Performing Arts Center at Soka University of America in Aliso Viejo. He continues to be involved in the presenting field as an independent contractor to organizations needing his experience and expertise. During his tenure from 2010 until 2018 at Soka, David opened this world-class concert hall and presented a diverse season of symphonic, chamber, jazz and world music. From 1991 until his arrival at SUA, David was the Theatre Manager for the Ruth B. Shannon Center for the Performing Arts at Whittier College. Mr. Palmer was also the co-founder and business manager for the Alternative Repertory Theatre, a small professional theatre based in Santa Ana, as well as an award-winning freelance lighting designer with over 200 productions to his credit. David received his B.A., M.A. and M.F.A. in stage lighting design from California State University, Long Beach.